Tony Prout (1953-2018) was born in London and was educated at Eastbourne Grammar School. In 1972, Tony joined the Police Service in Sussex, a career spanning 30 years,during which he rose to the rank of inspector. Tony was also a self-defence and judo instructor. His two sporting passions were snooker and bowls. He won the British Isles Singles title in bowls in 1997. Tony was diagnosed with dementia and Parkinson’s disease in December 2017. Given the nature of these conditions, Tony made the decision to travel to Dignitas, choosing to die with dignity while he still had control of his own life. Tony leaves his wife, Alison and his son, Teddy. 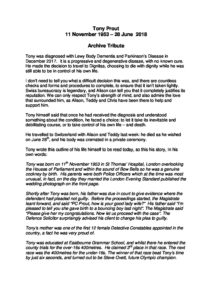 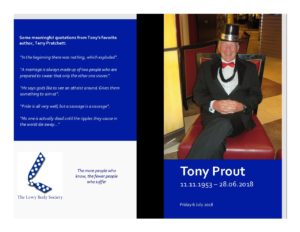 Tony Prout Archive Tribute (Word)
Celebrant and tribute contributor: Steph Bramwell
Tribute to Tony Prout delivered at a Humanist funeral organised by their family. Includes a digital copy of a leaflet given out during the funeral service (2018).