Ursula Henriette Barbara Rhodes (1923-2011) was born in Germany but was sent to England, aged 15, when Germany became unsafe for the Jewish community. Sadly her parents, Gertrud and Heinrich Michel and her younger sister, Lilli, did not survive WWII. She was adopted by the Hawthorne Family and gained a brother and sister, Philip and Stephanie. She attended the Orme Girls’ School in Newcastle under Lyme. Ursula became naturalised as English. She married Harold Rhodes in 1946, a union that lasted 64 years. They were both active in the Labour Party. Ursula left work after the birth of their daughter, Judith, in 1953. They later moved to London before retiring to Harrogate. 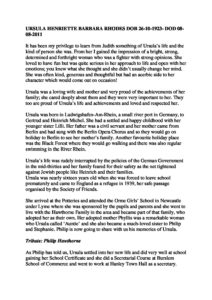