Iris Blake (1920-2018) was born Iris Holgate in Wakefield. She had an elder brother, Harold. She attended Wakefield Girls’ High School and then went on to do teacher-training. Iris volunteered as a fire-watcher during WWII. After the war she married Ian, her childhood sweetheart. They spent their first five years in Düsseldorf, where their son, Paul, was born. After returning to England they moved around with Ian’s job and Iris worked as an infant school teacher. They eventually settled in Winchester. In 1951 Iris and Ian both joined the International Society. Iris enjoyed going to the theatre, playing the piano and travelling to the continent and to America to visit Paul and their grandchildren, Daniel and Zoë. Iris also had six great-grandchildren, Kayla, Austin, Noah, Christian, Madison and Lincoln. Iris passed away at Lydgate Lodge aged 97. 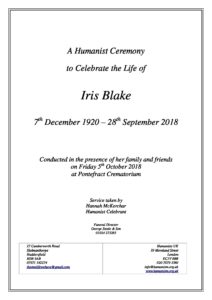