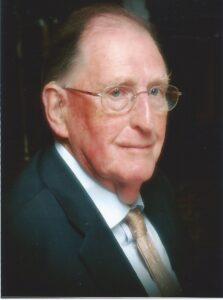 Harry Mellanby (1930 – 2017) was born in County Durham on 6 October and grew up near Stockton-on-Tees. He worked in local government, was responsible for the building of the Strode Swimming Pool, and had a street named after him. He enjoyed watching football, travelling, and gardening. Harry married Jean in 1953 and they had three children, John, Steve, and Elizabeth, five grandchildren, and four great-grandchildren.