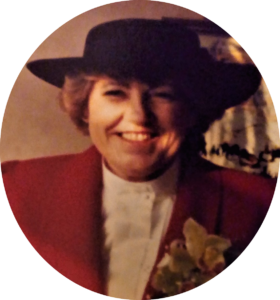 Bernadette ‘Bernie’ Mary Wilson (1933-2018) was born in Dublin, the third of four daughters to David Brendon and Anne Byrne. Mother and daughters moved to England when Bernie was two. During the war Bernie was evacuated to Wales. She went to Secretarial College and then worked in London. She married George Wilson in 1956. In 1961 they moved to Reading. Two years later they moved to Cardiff where they lived for over fifty years. Their daughter, Ann was born in 1964. Bernie later studied for a Certificate of Education and became a college lecturer in Cardiff. Bernie nursed George for ten years until he died in 2011. She had eight grandchildren and great grandchildren, Susan, Ian, Adam, Dominic, Eloise, Jessica, Alice and Ben. 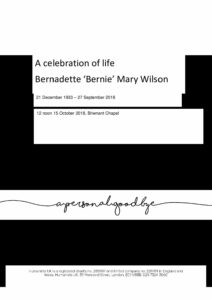