Olivia ‘Livvie’ MacDonald (1934-2018) grew up in war-time Birmingham and remembers the Lancaster bombers leaving the Longbridge works near her home. She had a sister, Ruth, and a brother, John. Livvie learned guitar and performed locally in a folk band. She joined The Royal Signals as a radio operator in the early 50s and served in Cyprus. It was there that she learned to sail and developed a passion for boats – building two of her own later in life. After the army she worked in the electronics and engineering industry in the West Midlands. Livvie and Iris had quads in 1959, all of whom sadly died very young. Livvie is survived by her son, Brian. In 1990, whilst living in Cornwall, Livvie had a stroke which changed her life. In 2002 she moved to Hailsham to live with Theresa, whom she’d met, two years before, through an online forum for people going through gender reassignment. Livvie continued with her passion for making theatrical costumes and immersed herself in family life and part-time jobs. 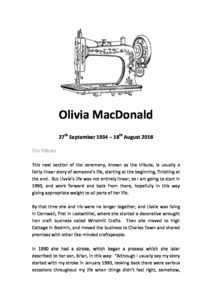 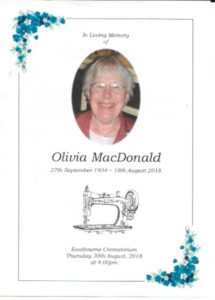