Peggy James (1922-2018) was born Peggy Gower, in Newport. She boarded at the Royal Commercial Traveller’s School in Pinner. She graduated with the British Transport Police in Cardiff in 1948. It was there that Peggy met her future husband Aubrey James. Aubrey left the police to work for British Steel. In 1954 they had their first child, Stephen, and a year later, Huw. In 1965 the family settled in London when Aubrey moved to British Steel headquarters. Peggy took a job with Thomas Cook in Mayfair. In 1974 they moved to Old Hatfield and later, back to Port Talbot. Aubrey took early retirement in 1982 and they moved to Reading. In 1986, Aubrey died suddenly of a heart attack, prompting Peggy to move to Chepstow. She loved theatre, museums and galleries and was a member of the Royal Academy. Peggy’s final home was an assisted living flat in Buntingford. 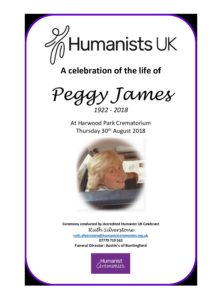