Hazel Mason (1923-2018) was born to Stan and Maud Pettitt in Birmingham where she grew up with her sisters Win and Carol. She won a scholarship to King Edward’s School for Girls, where she showed an aptitude for art. After a brief evacuation to Cheltenham, she returned to Birmingham to attend the College of Arts and Crafts in January 1940. It was there that she met Ted who she married in 1946. Hazel had a long career as a teacher and an artist. She had three daughters, Sue, Cherry and Penny. Four grandchildren, David, Wendy, Kim and Paul. Great grandchildren, Harvey, Jasper, Teddy, Ben, Joey, Albie, Allie and Dougie. Hazel and Ted travelled widely in their retirement. She moved to Devon after Ted died. 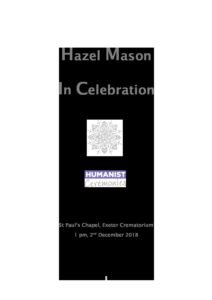 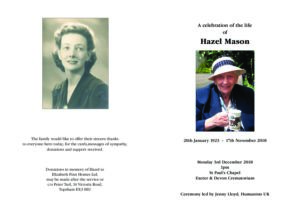