David Peacock (1956 – 2018) was born in Cassington to parents Lionel and Eileen. He had five sibling but was particularly close to his elder sister, Jessica. David attended the village school in Cassington, and then Bartholomew School in Eynsham, where he showed himself to be a bright student. After school he joined NatWest Bank but, on a trip to India, decided to change career and qualified as a nurse at the John Radcliffe Hospital. David later returned to banking with the Co-operative Bank until 2018. He had a fondness for Indian food and culture, was a keen knitter and creator of cakes. 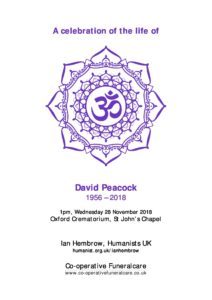