Jennifer Ann Bradford Knox (1933-2018) was born in Richmond, London, to Edwin and Eulalie Latham. She had three older siblings, Stephanie, David and Jacqueline. She also had a younger step-sister, Betty. Jennifer attended The Sacred Heart Convent in Hastings but was later sent to a French speaking boarding school in Antwerp, after the early death of her mother. The language later enabled her to work on the French telephone exchange. Jennifer lived and worked in various places including London, Stevenage, Beith in Scotland, Basingstoke and at the Red Lion in Wendover which is where she met her partner, Richard. They had three daughters, Judith, Vanessa and Shiona and four grandchildren Sam, Alex, Daisy and Jonah. Jennifer loved reading, music and sport. 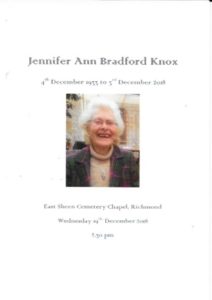