Joan Luffman (1927 – 2017) was born Joan Meacham in Pontypool, Wales on 20 February. She was one of seven children. During World War II she joined the Land Army. Joan was fond of cooking and travelled extensively across the UK and Europe. She married Alf and had three children: Carol, Ray, and Philip, and they stayed together until his death in 2004. 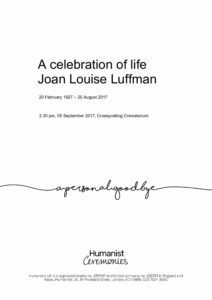