Shirley Joy Borsberry (1953-2018) Daughter of Joyce and Eric. Sister to Jean and Diane. Former wife to Spencer. Wife to David. Mother of David and Paul. Step mother to Vicki and Lee. Aunt to Marcus, Rachael, Adam and James. Grandmother to twins Amber and Rowan, to Myles and Taylor, and to Billy and George. Shirley was born and raised around Banbury. After her first marriage, she lived in the Midlands. She moved to Sunderland and married her second husband, David, in 1988. Shirley then earned a degree and taught maths to children with special needs and became a Teacher Governor. In 2008 they moved back to Banbury. 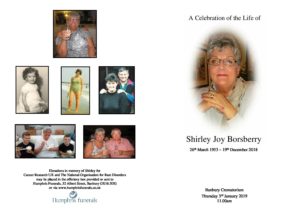