Victor James Woolley (1941–2018) grew up in Sheffield, with his mum and dad, Evelyn and James, and his younger siblings Ian, David and Cheryl. He joined the RAF Linguistics School and worked translating intercepted messages from spy planes flying over East Germany and quickly became fluent in Russian. After five years in the RAF, Vic returned to Yorkshire, where he married Sue. Mark was born in 1964. He separated from Sue and some years later married Christine with whom he had Richard and Katy. After the RAF, Vic became a corrosion consultant, a job which took him all over the country and to the Middle East where he became fluent in Arabic. He moved back to Yorkshire in 2011, having been in Azerbaijan and Georgia. He was a very well-read man and once appeared on the Granada TV show Runway. 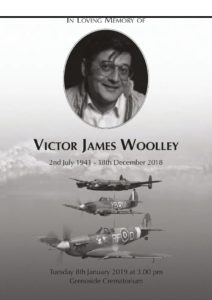