Audrey May Hotten (1924-2019) was born in South London to Harriet and Percy Barnard. They moved to Essex where her sister, Mary, was born. Audrey won a scholarship to Oxford University which she was unable to take up because she was called-up for the war effort. After leaving the Army, Audrey went to the London School of Economics where she earned a degree in History. She then got her Teacher Training Certificate and enjoyed a 31 year career in teaching. Her final post was Deputy Head Teacher at the Test Valley School in Stockbridge. Audrey had two children, Stephen and Jill, with her first husband, Dennis. Audrey married Edwin in 1973. In retirement they travelled around Europe in a motorhome. Audrey was involved with the University of the Third Age and Chairman of Southampton Camera Club. 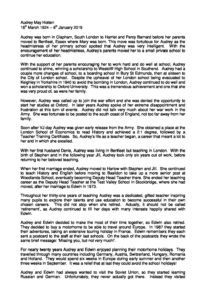 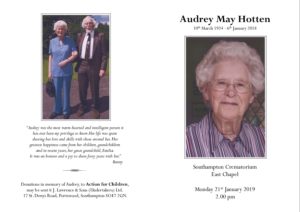 Audrey Hotten Order of Service (pdf)
Celebrant and tribute contributor: Avril Lucas
Tribute to Audrey Hotten delivered at a Humanist funeral organised by their family. Includes a digital copy of the funeral's order of service (2019)