John Jenkins (1929 – 2017) was born in Maesteg,Wales, the third of four children. After school, he took on a variety of jobs before settling down as a labourer at British Tissues in Maesteg, working his way up to shift manager before his retirement. He enjoyed cycling and was a skilled carpenter and plasterer. He married Anne and they were together for twenty years. 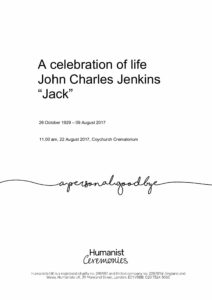