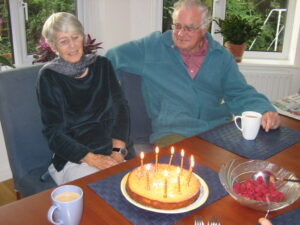 Dorothy Easty (1924 – 2018) was born in Northumberland to Charles and Maria Usher. She had two older sisters, Muriel and Brenda. Dorothy went to the Duchess’ School, in Alnwick, where she showed an early aptitude in sciences. She then studied Chemistry at University College London, gaining a first class Honours degree, and a PhD. Dorothy was Senior Lecturer in Cell Biology at the Institute of Cancer Research. She published many papers and two books, one of which became the leading textbook on the subject. Dorothy married another UCL chemist, Gerald Easty in 1948. They lived in London and had two children, Anthony and Gillian. Dorothy was an accomplished tennis player, becoming Women’s Tennis Champion at London University. As shop steward for the union ASTMS, Dorothy negotiated improved terms for part-time staff. After her retirement Dorothy volunteered at the Streatham Oxfam shop, and regularly supported the Streatham Youth and Community Trust. As Gerry’s health failed, Dorothy devoted herself to caring for him. She had five grandchildren Austin, Lewis. Daniel, Laura and Anna. 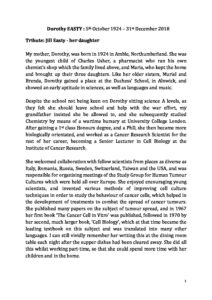 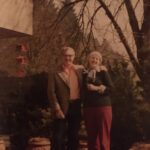