Charles ‘Charlie’ Francis Legg (1939 – 2019) was born in Kent to Stuart and Margaret. He had a sister, Ruth and two brothers, Tom and Robby. From 1940, the family spent time in North America before moving back to England in 1948. Charlie attended Frensham Heights School in Surrey, close to where the family then lived. After school he did psychology at Manchester University, and later, a psychology PhD at Cambridge, where he also captained the university hockey team. Cambridge is where he met his first wife Veronica, with whom he had two children, Jessica and Jake. He then did a three-year stint at Stanford in California. Charlie returned to London where his interest turned to public housing, working at the National Federation of Housing Associations for ten years and then at the Housing Corporation. Charlie was an active volunteer on various committees and boards. Charlie met Kate in 1972 and set-up home with her and her son, Justin, in Camden Town. He was ‘Grandpa Charlie’ to Rubi, Jamie, Rose and Mia. 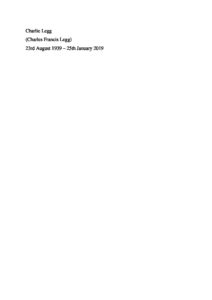 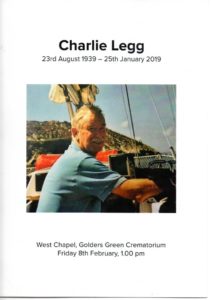