Ralph Earnest Southard (1927-2019) was born into the family of Hilda and Frank Southard, a younger brother to Frank. It was a close family with many relatives living nearby. Ralph was raised in Southampton and remembered the German bombers over Southampton during the war. At the age of fourteen, Ralph joined Whites, a yacht-building company, as an apprentice joiner. He had over twenty five jobs before retiring. Ralph and Myra were married for sixty-six years and had two children, Roger and Wendy. He was a Freemason, keen golfer and artist and a life-long Southampton FC supporter. Ralph had two grandchildren, Terry and Niky. 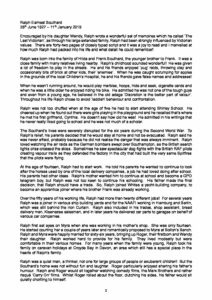