Geoffrey Kidson (1927–2019) was born near Wolverhampton to Norman and Vera. He had a younger brother, John. Geoffrey won a scholarship to Wolverhampton Grammar School. He then went to Merton College, Oxford, to study ancient literature, history and philosophy. After university, he did two years’ National Service, as a Pilot Officer in the Royal Air Force. Geoffrey joined the Civil Service in 1952, as an Inland Revenue tax inspector. He relocated to Bolton, where he met Margaret. They were married in 1954. Mike, Anne and Caroline came along over the next few years. After retiring from the Inland Revenue, Geoffrey ran a small tax consultancy firm for a few years. After Margaret’s premature death in 1995, he got involved in the University of the Third Age, where he led the History and Playreading groups. Geoffrey had three grandchildren, Eleanor, Isabel and Emily. 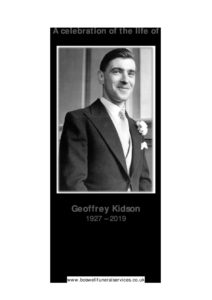