Freda Ann Sack (1951-2019) was born in Middlesex to Bernard and Betty. The family soon moved to Kent. She had a younger sister, Linda. Freda went to Maidstone College of Art to study Typographic Design. It was during this time that she met John, whom she married in 1972, a marriage that lasted for 47 years. Her first job was at Letraset International. In 1978 Freda became senior type designer to Hardy Williams Design in London. In 1983 Freda went freelance and set up The Foundry in 1990. Freda was passionate about typography, working tirelessly for the ISTD and lectured at numerous institutions. She was awarded an Honorary Degree by the University of the Creative Arts and an Honorary Fellowship of the ISTD. Freda and John were both yoga teachers, and very active in the world of yoga. They were also both keen scuba divers. Freda died in Surrey. 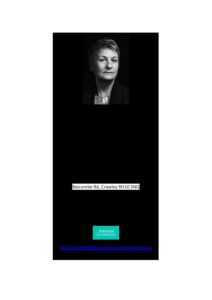 Freda Sack Order of Service (pdf)
Celebrant and tribute contributor: Felicity Harvest
Tribute to Freda Sack delivered at a Humanist funeral arranged by their family. Includes a digital copy of the funeral's order of service (2019)