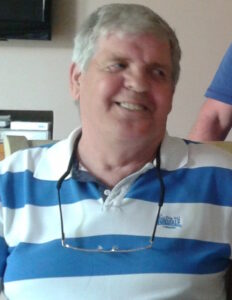 David Frank Hydes (1948–2018) was born in Leeds to Albert and Ada. He had two brothers, Michael and Graham. David won a place at Leeds Grammar School and represented the school at rugby and swimming. He then studied English and Geography at Liverpool University. After teacher training, his first teaching job was at Ruffwood Comprehensive, on Merseyside. In 1977 he became head of the Upper School at Beaminster School in Dorset. It was here that he met Pamela. They moved to Great Yarmouth in 1986 and married in 1989. David bred and showed dogs and built show jumping courses. They moved to South Wales where David worked at Oakwood School in Caerphilly. He retired in 2007, after his cancer diagnosis and died in south Wales. 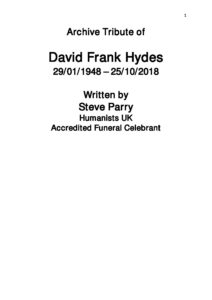