Lucy Buckley (1925 – 2015) was born Lucy Mannerings in Cranbrook near Goudhurst on 6 February, and spent her childhood in Kent. She worked as a waitress and then during World War II she joined the Auxiliary Territorial Army. Through this, Lucy met husband Tommy who she married in 1948. They stayed together until her death. She enjoyed spending time with her family and doing the housework. After her marriage, she worked a variety of part-time factory jobs and had three children. 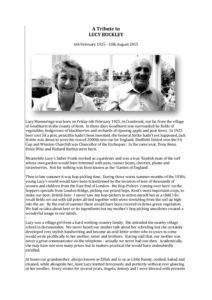