Nic Snow (1963 – 2019) was born in Hammersmith to Betty and Alf. He had three siblings, Malcolm, Elaine and Chris. His parents separated when Nic was nine, and he and Chris spent a year in New Zealand with their father. On return, Nic spent chunks of time with his mother or father living in west London. After leaving Westminster College he tried various things, starting out in retail. In the 80’s, he became a copywriter and worked for some of the top London agencies such as Saatchi’s, working in film, TV and print. Nic married and had a daughter, Kelly. He moved to Eastbourne in the late 1980’s. He set up his own business, designing and building websites for his clients. He was also a part-time technical adviser for The Fertility Network and Dyslexia Action. Nic had a passion for motorbikes. He also loved films, gaming and reading. Nick was reunited with Cally, his sweetheart from college, and he spent his last few years with her. Nic died in Eastbourne. 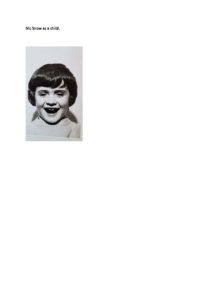 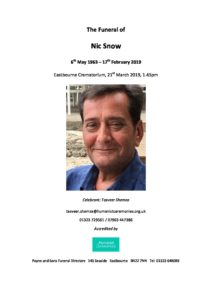