Patricia Mary Clark (1933-2019) was born in the tiny village of Corofin, in Ireland, to Michael and Mary. At the age of 15, she was sent to stay with her sister in Cardiff to look for employment. She trained as a nurse and joined the newly-formed NHS, and specialised in theatre work for many years. Patricia met Jim in 1956 and after a five year long-distance courtship, they married in Kensington High Street in 1961. They moved around the country, spending a while in Manchester, where Pat worked at St. Joseph’s Hospital, running the operating theatre. In 1967 their daughter, Patti, was born. In 1972, the family went to live in Singapore. When they moved back, they bought a house in Tunbridge Wells and Pat went back to nursing, this time in geriatrics. She died in Tunbridge Wells. 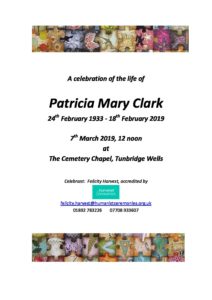