Patrick Edward Clerkin (1931-2019) was born in Cavan, in the Republic of Ireland. He grew up on a farm with his mother, stepfather and siblings. His stepfather took him out of school when he was just was six years old to work on the farm. He never went back to school and never learned to read and write. Patrick moved to London in his early 20s. He found employment with Camden Council in their parks and gardens department. He lived in Kentish Town and had an allotment where he grew vegetables. Patrick only went back to Ireland once after leaving but kept in touch with his sister, Margaret, by phone. He was a sociable character and loved helping people, especially his neighbours. When Patrick became less fit, he accepted the help of the Irish centre befrienders service. Patrick started to get dementia and was looked after in his last years by the carers at Maitland Park Villas. He died in Belsize Park, in North London. 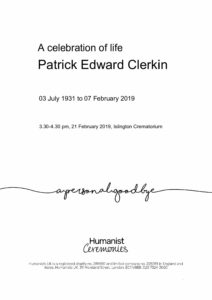 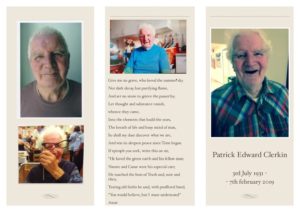 Patrick Clerkin Order of Service (pdf)
Celebrant and tribute contributor: Kate Hobson
Tribute to Patrick Clerkin delivered at a Humanist funeral arranged by their family and delivered by Kate Hobson. Includes a digital copy of the funeral's order of service (2019)