Philip Sears (1946–2019) was born in Birmingham to Herbert and Irene. He had an older brother, David. They moved to Leatherhead when Philip was still young. He went to Kingston Grammar School, where he captained the school swimming team. Philip was a talented musician, guitar player and singer. He performed and worked in folk clubs in his younger years. Philip met Sue while studying at Brighton College of Technology. It was their shared love of folk music that brought them together. They married in 1968. They had various homes around Surrey including one they built from scratch to Philip’s design. Philip and Sue became parents to Matthew in 1971. As well as a successful career as a draughtsman, Philip was as accomplished athlete. This started with his involvement with Dorking Lions Club. He was a participant, coach and marshall in various marathons, triathlons and channel swims. He suffered a heart attack after competing in a Guildford biathlon but recovered to carry on competing. Philip was a grandfather to Claire and Elizabeth. He was living in Surrey at the time of his death. 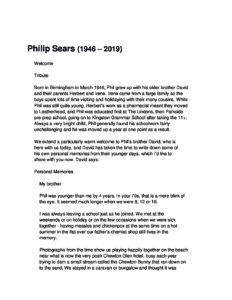