Frederick ‘George’ Richardson (1927-2019) was born in a small village in rural Cambridgeshire. He was the oldest of four children. From a very early age, George worked on farms, along with the rest of his family. At school, he passed his eleven plus exam but the family could not afford for him to continue with his education. George did National Service and served in India. He had three daughters, Beverley, Petrina and Marion, with his second wife, Mary. The family moved to Peterborough, where George worked in the brickworks. After redundancy, they moved to Outwell in Norfolk, where George, once again, worked on the land. George died in Norfolk. He had six grandchildren, Lewis, Deven, Charlotte, Isobel, Bethany and Jake. 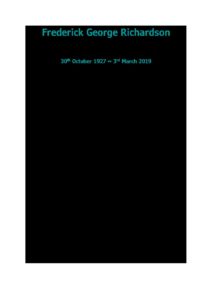