Derek Royston Ede (1927 –2019) was born to Grace and Alfred Ede. He had an elder brother, Frances. He grew up in Welling, Kent. As a teenager, he became a messenger for the air raid wardens. After Dartford Grammar School, he joined the Merchant Navy. One of the ships he was on was hit during that last year of the war, but fortunately did not sink. After the war, Derek worked at Siemens and then moved to Shell’s tanker division. He travelled all over the world as a radio superintendent. Derek and Joan met at the Embassy Ballroom in Welling. They bought a bungalow in Bexley Heath. They had three children, Nevil, Paul and Victoria. In 1965 the family moved to Fleet, Hampshire. They lived there for fifty years. Derek took early retirement from Shell and worked as a magistrates court usher and as a guide at Stratfield Saye House. Later in life he started racquet stringing for local players and clubs. As a sports player he was very active in squash and badminton. Derek’s funeral was in Tunbridge Wells, Kent. 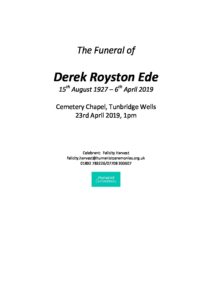 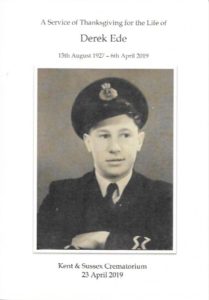 Derek Ede Order of Service (pdf)
Celebrant and tribute contributor: Felicity Harvest
Tribute to Derek Ede delivered at a Humanist funeral arranged by their family. Includes a digital copy of the funeral's order of service (2019)