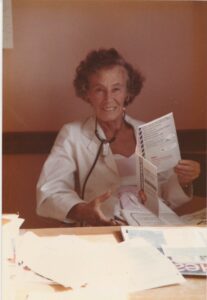 Dr. Andersen “Andy” Maria Burrows (1921–2019) was born in Freiburg, Germany to Ulla and Paul Otto Rosin. She had a sister, Helge, and a brother, Sebastian. When Andy was 12 the family moved to France, then to England five years later. Andy completed her secondary education at St Paul’s Girls School, then went on to study medicine at the Royal Free Hospital in London, graduating in 1945. She was married to David and had two children, Nicholas and Beverley. Andy had a long career as an A & E consultant. Outside work, she travelled the world extensively, particularly the Americas, where her son lived. Andy was very close to her granddaughter, Merrigan. They cared for each other for the last six years. Andy died in London at the Beaumont Barchester Care Home. 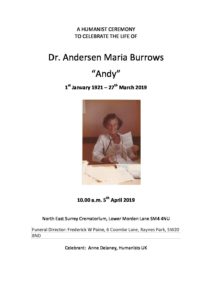