John Frederick Newman (1941-2019) was born in Salford, Oxfordshire. John was a very talented footballer. He played for the school, local and County teams, winning many cups and trophies along the way. He had trials for West Bromwich Albion and played for their school boys’ team. After his retirement as a player, John ran several youth and seniors teams. He started work as a driver’s mate for Hitchmans Brewery and then for Leach & Haynes as an electrician. He then joined the family electrical business of Oliver & Newman at their shop in Moreton in Marsh, ultimately taking over from his father as director. John married Pam in 1963 and they had two sons, Martin and Shawn. John and Pam spent a lot of time at their villa in Spain. John had two granddaughters, Gemma and Rachelle. 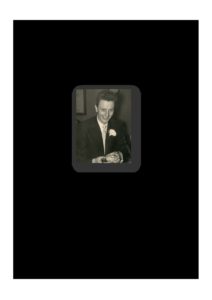 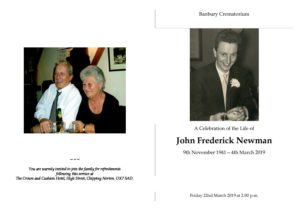 John Newman Order of Service (pdf)
Celebrant and tribute contributor: Ian Willox
Tribute to John Newman delivered at a Humanist funeral arranged by their family. Includes a digital copy of the funeral's order of service (2019)