Robert Frank Leeves (1938–2019) was born in Peacehaven, the eldest of Alice and Maurice Leeves’ four children. When he left school, Robert got a job with an electrician, repairing radios and televisions. Married life with Susan started in a rented semi-derelict house in Newhaven, but they moved to Australia to join Robert’s brother, Rodney. They bought a house and had their daughter, Nadia. They moved back to England in 1975 and bought a house in Telescombe, followed by a series of houses to renovate and sell-on. In 2001, Robert retired, and he and Susan moved to Spain. When Robert began to have health problems, they moved home to England to be near to family, and the NHS. Despite health problems in later life he remained active and engaged with life until he had a stroke. Robert died in Eastbourne. 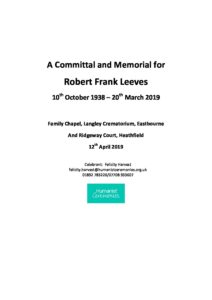