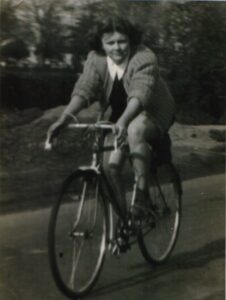 Beryl Margaret West (1932 – 2019) was born in Nottingham to Kitty and George Grafton. She had four younger siblings, Doreen, David, Marilyn and Ken. Beryl had the responsibility of helping care for her younger siblings at an early age. Beryl dreamed of going to art college, but she left school at 14 to start work as an office junior for a firm of solicitors. Beryl then became a switchboard operator. Beryl was a keen cyclist. She met Alan West at the Nottingham Wheelers when she was 18. Tragically Alan had a bad cycling accident, leaving him in a wheelchair. Despite this setback, they married in 1956 and six years later they had a daughter, Diane. The family lived in Wollaton Park and Beryl worked as a secretary at Sherwood Bleachers and Dyers, and later at Nottingham University. She retired in 1990. Beryl had many interests including gardening, baking and playing the piano. She also travelled a lot including supporting Alan at international athletic events. Beryl also supported others through the Spinal Injuries Association. After Alan died in 2007, Beryl continued to lead a full life until health issues proved too much. Beryl died in Nottingham. 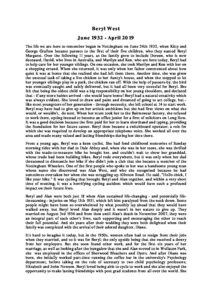 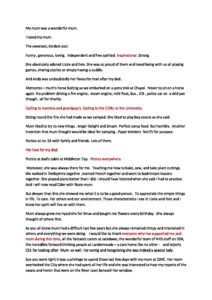 My mum was a wonderful mum (pdf)

My mum was a wonderful mum (Word) 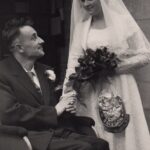 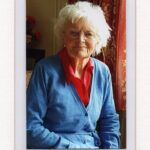 Celebrant and tribute contributor: Ingrid Taap
Tribute to Beryl West delivered at a Humanist funeral arranged by their family. Includes a document titled 'My mum was a wonderful mum' and three digital photographs of Beryl (2019)