Brian Attewell (1937 – 2019) was born in Bromley in 1937, a brother to Lainey. From a young age, Brian was intellectually curious and widely read with a sense of adventure and fun. He was open minded and stood up for what he believed in. He often talked about his schooling at Dulwich College, where he made some life-long friendships. He studied at the London School of Economics and went on to a diplomatic career and many overseas postings. He married Mary and they had three children, Alex, Zoe and Guy. Mary died in 2000 and Brian later met and married his son Guy’s mother-in-law, Angelika. They spent the last eighteen years of Brian’s life happily enjoying shared interests and travel. He had six grandchildren, Amy, Lark, Lali, Lula, Jalin and Ameya. Brian was a life-long supporter of Charlton Athletic. 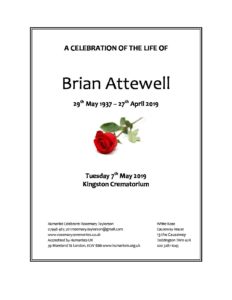