Audrey Goodwin (1925 – 2019) was born in Teddington. She was the middle child of George and Dora Vail. During the war, the family lived Cheltenham. When Audrey left home she moved to Guildford and qualified as a state registered nurse. She worked as a theatre sister on the first skin grafts in the country. It was during this time that she met Tony Goodwin. They shared a love of culture, particularly amateur dramatics, and of competitive sport. They were married in 1950. Tony’s work meant moving to Warwickshire, where Joanna and Paul were born, then to Royal Leamington Spa, and finally to Carshalton in Surrey. Audrey continued nursing at the local cottage hospital in Surrey. She became an Avon Lady, and a market tester for Cadbury. On Tony’s retirement they moved to Bexhill. Audrey started playing competitive golf, becoming Lady Captain at Highwoods for a period. She became involved in the local Macmillan Cancer Fund activities. In 2017 she moved to Suffolk to be closer to Joanna. Audrey died in Suffolk. 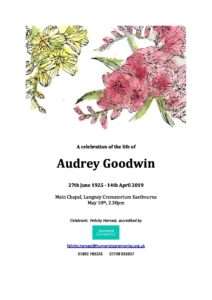 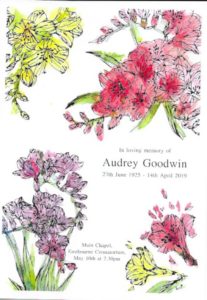