James Leverton (1988 – 2019) was born in Oxford, the youngest child of Sue and Colin. James went to the Edith Moorhouse primary school, Carterton Community College and Burford School. Dyslexia made education difficult for James and he dropped out of school at 14. He attended the Allandale youth centre in Carterton, where he was encouraged to volunteer. James won a scholarship to study for a Degree in Youth Work at Ruskin College in Oxford and became a youth worker for the armed forces charity SSAFA at RAF Brize Norton. James met his partner, Tina, in 2016. He was a keen sportsman, with a particular interest in martial arts. James was diagnosed with Chiari brain malformation. Despite major surgeries, he was in pain and eventually unable to work. 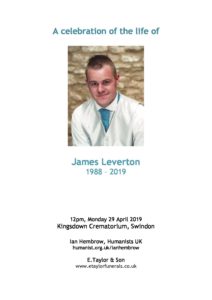