Anne Margaret Roberts (1946 – 2019) was born in Middlesborough. She attended school there and at Our Lady’s Convent in Abingdon. She was first married in 1965 and Richard was born in 1969. Anne worked at the Atlas Laboratory and the Natural Environment Research Council. She married Gareth in 1975. Anne took early retirement in 1998 and became a driver for the Wallingford Volunteer Centre, until 2011. She also looked after young adults with physical or mental disabilities. Anne liked to travel, often with her two granddaughters, Chloe and Jordan. She was a keen swimmer, tennis player and an active member of the Thames Valley Egyptology Society. Anne died at the John Radcliffe Hospital in Oxford. 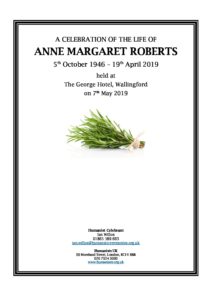