Peter Weaver (1938 – 2019) was born in Wakefield to Peggy and Bill. He was the eldest of seven children, Michael, Terry, Maureen, Brian, Christine and Gary. Peter left school at fifteen, going into a plumbing apprenticeship at Gillot’s in Wakefield. He spent his National Service with the Royal Engineers, six months of it in Germany. Peter married Joyce when he was 21 and become a dad to Bridget and Andy. He and Joyce were temporary carers at Flanshaw Children’s Home, and foster carers themselves. They separated in the mid 70s and Peter worked hard to look after Bridget and Andy on his own. Peter married Margaret in 1995 and became step-dad to Christopher and Robert. Peter was self-employed for many years but spent the last ten with Wakefield District Council. He was a grandfather and great-grandfather. Peter’s deteriorating health and the loss of Margaret in 2017 necessitated him moving into Carr Gate Nursing Home. He died in Wakefield. 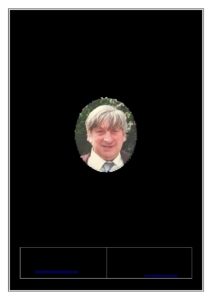