Lilian (Anne) Pidgeon (1925 – 2019) was born in Hackney, to Alfred and Ethel Cottee. She had a younger brother, Ernest. When she was about six, the family moved to Southend on Sea, where she attended Hamstel Road Primary School and later Southend High School for Girls. Anne was evacuated to Nottinghamshire during the war. She left school at 17 to train as a nurse, in Sheffield. Two years later, Anne was recruited by the Armament Research Department. In 1951, Anne married Denis Pidgeon at Cambridge Shire Hall. They had six children, Colleen, Karen, Hilary, Alastair, Stuart and Sean. After she left the MOD, Anne retrained as a teacher and worked as an infant school teacher in Crowthorne, Berkshire. Anne and Denis settled in Wenhaston in 1983. After Denis died in 2005, Anne continued to live in their country bungalow until she died there. She was a prolific artist, with a particular love of handcrafts like needlework, pottery and knitting. Anne had 15 grandchildren and 11 great grandchildren. 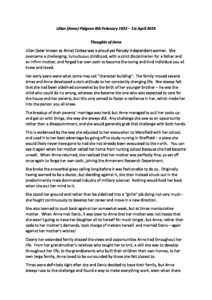 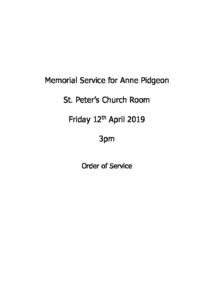 Lilian Pidgeon Archive Tribute (Word)
Celebrant and tribute contributor: Adele Chaplin
Tribute to Lilian (Anne) Pidgeon delivered at a Humanist funeral arranged by their family. Includes a digital copy of the funeral's order of the service (2019).