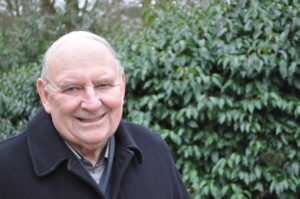 Terence James Dashwood (1937 – 2019) was born in the East End of London, the only child of Ivy and Jim. He was evacuated from Stratford to Bedfordshire, aged three. He went to Bedford Modern School. Terence did his National Service in the RAF. He started work at Goldington Power Station near Bedford, later moving to London to be an industrial chemist with the CEGB at Littlebrook and Battersea Power Stations. He married (Rosemary) Fay Thomas in 1962 and moved to Streatham. Neil was born in 1964. They then moved to Bromley where Sara was born, followed by Stuart a couple of years later. In 1978, Terence moved to Sapele, Nigeria in 1978 to run a power station for a few years. On returning to England, he continued to work with the CEGB, eventually moving to Ightham, Kent. In 1989 he relocated to Somerset, working at Nuclear Electric in Bedminster. It was here he met his second wife Margaret. In retirement, they shared a real passion for walking and gardening. He had 10 grandchildren. 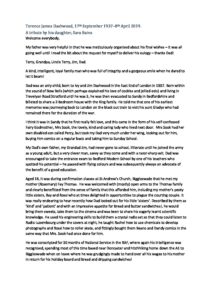 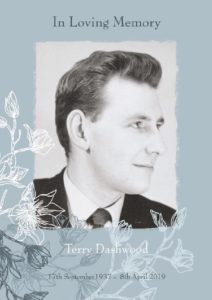 Terence Daswhood Order of Service (pdf)
Celebrant and tribute contributor: Julie Wright
Tribute to Terence Dashwood delivered at a Humanist funeral arranged by their family. Includes a digital copy of the funeral's order of the service and a digital photograph of Terence (2019)