Timothy John Maskell (1961 – 2019) was born in Rotherfield, the younger child of Margaret and Fred. He had an elder sister, Sandra. The family moved to Crowborough when Tim was seven, where he attended the Beacon School. He left school at 16 and trained as an engineer. He became an administrator for the Engineering Council. From there he moved to Sussex Enterprise as Head of Business Development. He then became marketing manager of Brighton Bears Basketball Club. He later retrained to work with people with autism and learning disabilities. He also enrolled on a part-time Postgraduate course in psychology and hypnotherapy. Tim also had a Masters degree in Change Management. As a young man, Tim was very involved in martial arts and running. He did two London Marathons, the Brighton Triathlon, and the South Downs 100 mile run twice. He married Hilary in 1992. They bought a house in Maresfield, where Luke was born in 1996. In 2018 Tim met and moved in with Caroline but shortly after that Tim was diagnosed with leukaemia. 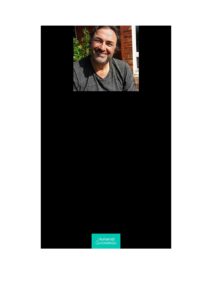 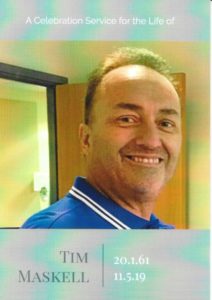 Tim Maskell Order of Service (pdf)
Celebrant and tribute contributor: Felicity Harvest
Tribute to Timothy Maskell delivered at a Humanist funeral arranged by their family. Includes a digital copy of the funeral's order of the service (2019)