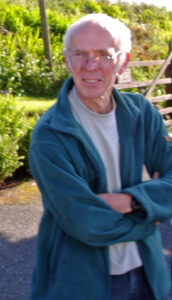 Andy Fitch (1944 – 2017)was born in Grippa, a town near Leipzig in Germany, before moving with his mother to London as a child. He studied economics at Emmanuel College, Cambridge and then went on to become a teacher. He was a keen swimmer, hiker, and cyclist and ran the school chess club. He married his wife Marian in 1967 and they had three children: Chris, Jenny and Steve.