Patricia Joyce Newell (1935 – 2019) was born in Swaythling, Southampton to Len and Mabel Hendy. Pat’s schooling was disrupted by the Second World War. Her school, Swaythling Primary was taken over by the Army and some of the soldiers, including Americans, befriended Pat and her sister Jan. In the early fifties Pat met Jim Newell at the Top Rank Ice Rink. Their friendship turned into romance and a marriage which lasted over sixty years. Their house in Edwina Close became their life-long home where Pat brought up their two sons, Paul and Gary. For twenty-three years Pat worked in the sports shop Waterhouse and Collings. Pat particularly liked taking holidays in Greece. One year, Pat and Jim went to Richmond Virginia to visit one of the American soldiers who had befriended Pat in the War, and had become a close family friend. Pat’s hobbies included sewing counted cross-stitch pictures, embroidering tapestries, playing Scrabble and collecting Royal Mail memorabilia. 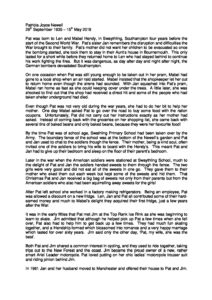 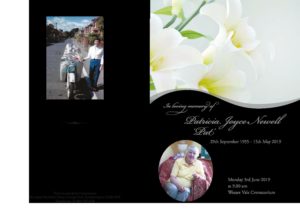 Patricia Newell Order of Service (pdf)
Celebrant and tribute contributor: Avril Lucas
Tribute to Patricia Newell delivered at a Humanist funeral arranged by their family. Includes a digital copy of the funeral's order of service(2019)