Barbara Edwards (1948 – 1919) was born Barbara Coe at Shipley Maternity Home. Barbara grew up in Shipley and went to Albert Road Junior School, followed by Salts Grammar School. On leaving school, Barbara went to Keighley Technical College to study shorthand and typing, leading to a job at the Bradford and Bingley Building Society, where she became Personal Assistant to the Chief Executive. Barbara was involved with the Bradford Amateur Rowing Club for 50 years. In 2012 she was awarded the Medal of Merit for services to regattas. She held the position of Honorary Secretary of the Yorkshire Rowing council and organiser of the region’s flagship event, the Yorkshire Head. Barbara married Terry Edwards in 1975. By 1977 they had moved into the house on Warren Avenue, where they were to spend the rest of their lives together. In 2013, Barbara also became clerk to the governors of Belle Vue Girls Academy. Barbara died on 27 April 2019. 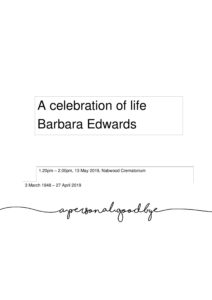 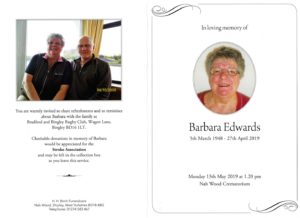 HFTA 203 Barbara Edwards Order of Service (pdf)
Celebrant: Janice Thornton
Tribute to Barbara Edwards delivered at a Humanist funeral arranged by their family. Includes a digital copy of the funeral's order of service (2019)