Ray Beresford (1933 – 2019) was born in Long Eaton, Derbyshire to Elsie and Albert. He had two older siblings, Eugene and Madge and Johnny Walker, an orphan taken in by Ray’s parents, became a lifelong friend, more like a brother. After a short apprenticeship as an electrician, Ray worked at the Royal Crown Derby factory. After marrying, Ray moved to West Hallam where his two daughters Karen and Gail were born. Ray’s last job in Derbyshire was at the British Celanese factory. In the early seventies, Ray, with Gail moved to Gosport to live with his parents and to be near Karen. Ray got a position with the Department of Environment where he worked for nearly twenty years. In 1976 Ray moved to a flat in Harbour Towers. It was here he met Heather whom he married 3 months later. Later that year Ray and Heather bought a house in Queen’s Crescent which they extended themselves and Ray finished off, using his carpentry skills to build fitted furniture. Ray was an enthusiastic cook, baker and brewer. Ray and Heather enjoyed many holidays, especially those in Greece. Ray was a grandfather to Lorne, Lianne and Luke. Ray was proud of being one of Terry Wogan’s ‘TOGs’ and he was always up for playing one of his little tricks or practical jokes on his family and friends. 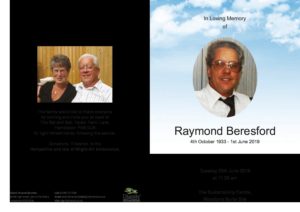 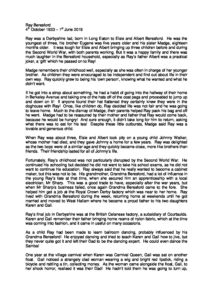