Peter John Start (1932 – 2019) was born in Southwark, the second youngest of Charles and Marguerite’s six children. Peter was evacuated during the war, to a farm in Cornwall. When he was back in London, he finished his schooling at St John’s, near Waterloo, becoming the head prefect. He left school at 14, first working in a solicitor’s office, then going into engineering as an apprentice. Peter met Margaret when he was 25. A year later, they were married, the beginning of sixty happy years. He was a keen sportsman – football, cricket, tennis and table tennis, and later took up fishing and golf. Peter continued as an engineer with Laystall Engineering until he was in his mid-40’s, and then went to work in Trading Standards for Southwark Council until he retired at 56. In 1991, Peter and Margaret moved to Surrey. They then moved to Memphis, Tennessee for seven years, from where they travelled all over the States. They came back to England in 2006, and settled in Oxted. They had three children, Daryl, Russell and Melanie plus grandchildren and great grandchildren. 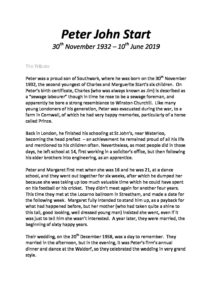 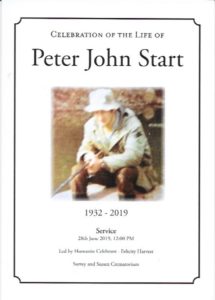