‘Joe’ Joseph Staples (1941 – 2019) was born in Leamington Spa to Joseph and Edith. He had a twin sister, Josie, and a younger sister, Jill. By his early twenties, Joe was serving in the Army with the Queen’s Life Guard and was chosen to be one of the horsemen guarding Winston Churchill’s coffin in 1965. At around this time, Joe met Barbara and they returned to Nottingham where they married and had two sons, Andrew and Mark. Following the breakdown of their marriage Joe had no contact with his family until 2013 when Mark re-established the relationship, bringing much happiness to the wider family following years of separation. Joe had married again and moved to Somerset where he was popular in his village and enjoyed quizzes and cricket. 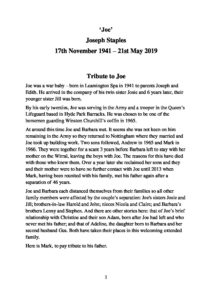 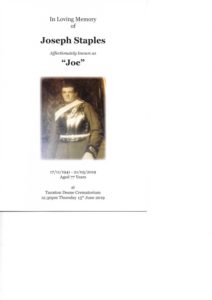 HFTA 206 Joseph Staples Front Cover of Order of Service (pdf)
Celebrant: Margaret Gibson
Tribute to 'Joe' Joseph Staples delivered at a Humanist funeral arranged by their family. Includes a digital copy of the front cover of the funeral's order of service (2019)