Marion Spencer (1920 – 2019) was born and raised in the London Borough of Harrow. Her parents were Thomas Wilson Fox and Mabel Dalton. She had two sisters, Barbara and Shirley. She went to Brondesbury & Kilburn High School, where she became head girl. Marion then went to UCL where she gained a First in a general arts degree. Conscription took her into the Board of Trade as a civil servant, during the war. In 1945 she passed the exam into the Administrative Class of the Civil Service. She met her husband, John, at Staff College. They married in 1958, after a nine year courtship. Marion then left the Civil Service and moved to London where Cathy was born. Richard arrived two years later. Marion loved opera and sang in a choir. After ten years in Croydon, the family moved to Oxford, and Marion took up a part-time post in the library at Westminster College. In retirement, Marion was an active member of Oxford U3A and established its opera group. She volunteered for the League of Friends at the John Radcliffe Hospital. Marion was grandmother to Tom, Beth and Matthew. 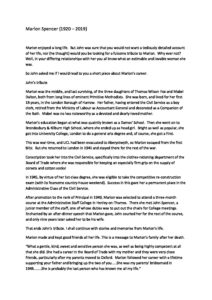 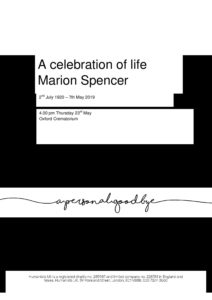 HFTA 210 Marion Spencer Tribute Cover (pdf)
Celebrant: Lesley Bottomley
Tribute to Marion Spencer delivered at a Humanist funeral arranged by their family. Includes a digital copy of the front cover of the tribute (2019)