Beryl Yvonne Halls (1933 – 2019) was born in Weymouth to Winifred and Charles Dibben, but grew up in Amersham. She had two brothers, Norman and Gordon. Beryl attended St. George’s Church of England School and Whitehill School in Chesham. She then trained at secretarial college in London before starting work in Fleet Street. Beryl married Patrick McKenna, in July 1951. They lived in Buckinghamshire, where Beryl had seven children, Susan, who died at one week, Jennifer, John, Tricia, Peter, Patrick and James. Patrick and Beryl parted ways in 1975 and Beryl moved to Amersham. In the eighties, after her children had moved away, Beryl took a job as an office administrator. In September 1986, aged 53, Beryl married Geoffrey Halls. Geoff died in 1999. Beryl was a grandmother and great grand-mother. Beryl was diagnosed with cancer in 2017. She died in the Florence Nightingale’s Hospice. 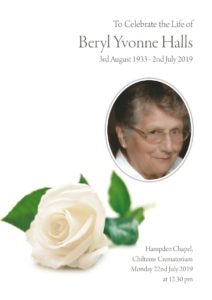 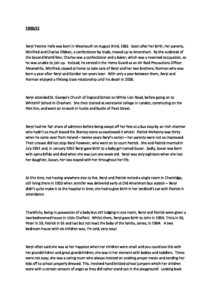 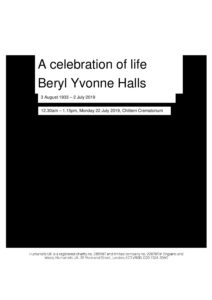