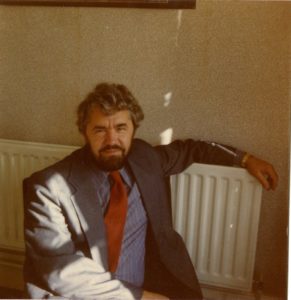 James Drewery (1927-2019). Jim was born in Aberdeen where he grew up with his sisters Dorothy and Lydia. On leaving Robert Gordon College, he did his National Service with the Gordon Highlanders based in Somaliland. He achieved a first class degree in psychology at Aberdeen University and then started his distinguished career in clinical psychology which took him to Belfast, Edinburgh, Dumfries and finally Exeter in 1974. He had four daughters, Lynn, Sue, Frances and Barbara, eight grandchildren and four great grandchildren. He was married to Janice for 40 years. He sailed, walked, skied and fished. 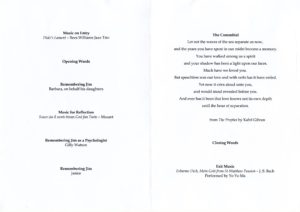 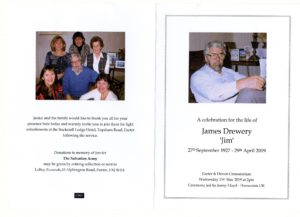 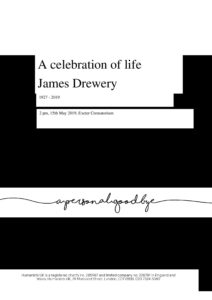 James Drewery Archive Tribute (pdf)
Celebrant: Jenny Lloyd
Tribute to James Drewery delivered at a Humanist funeral arranged by their family. Includes a digital copy of the funeral's order of service and a digital photograph of James (2019)