Allen Miller (1955 – 2019) was born in Plymouth to Grace and Walt. He had a younger brother, Geoff. He won a scholarship to Plymouth College. He read economics at university in Manchester. Allen graduated in 1976 and worked as a programmer for the North Western Electricity Board. He then moved to Hamburg in Germany for two to three years to teach English as a foreign language. He returned to London and worked at various jobs, most recently at an antique coin dealership in Bloomsbury. Allen had a son, Laurenz, but lost touch with him and his mother. Allen was fluent in German, and also spoke French and Italian. He was a serious chess player, playing at the Dulwich Chess Club, in the Croydon and District Chess league, and London leagues. Allen died on 3rd June 2019. 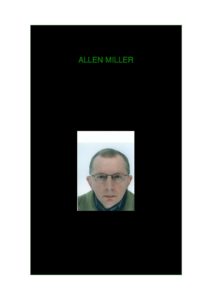 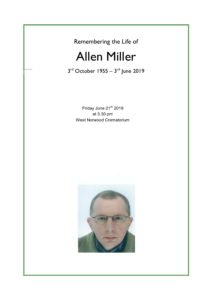 HFTA 216 Allen Miller Order of Service (pdf)
Celebrant: Deborah Hooper
Tribute to Allen Miller delivered at a Humanist funeral arranged by their family. Includes a digital copy of the funeral's order of service (2019)